On this page are some global warming pics that have been taken due to misunderstandings.


This is a very common misunderstanding about the global warming: 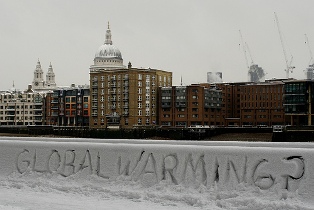 Global warming does not mean that every place on Earth will be  warmer!!

In fact, large parts will be colder and Europe is predicted to be covered in ice.

Our climate is largely affected by the so-called thermohaline circulation, a world-wide ocean stream that traverses all our oceans.

An important part of it is a place in the Atlantic Ocean, south of Greenland, where cold water sinks.

At least twice in the Earth's history that we know of, when the climate has gone warmer, the water hasn't been cold enough to sink in that place and that has stopped the whole 'conveyor belt'.

Gulf Stream, the warm stream that brings warmth up along the coast of eastern America and then northern Europe, is a part of the thermohaline circulation.

If the Gulf Stream stops, Europe and north America will be very cold places! 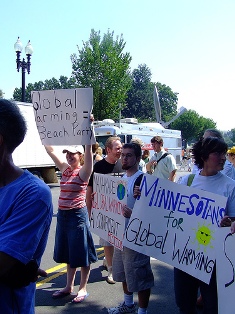 So Minnesotanians are NOT going to have a beach party as they hope on the photo above.

There is a lot more to global warming than hoping your local weather will get better!